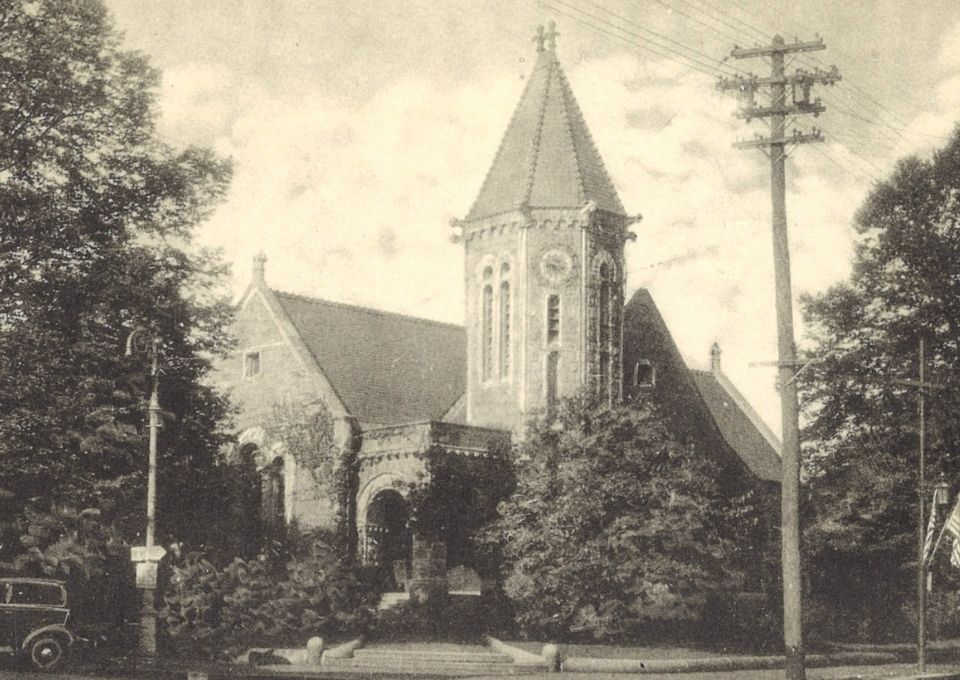 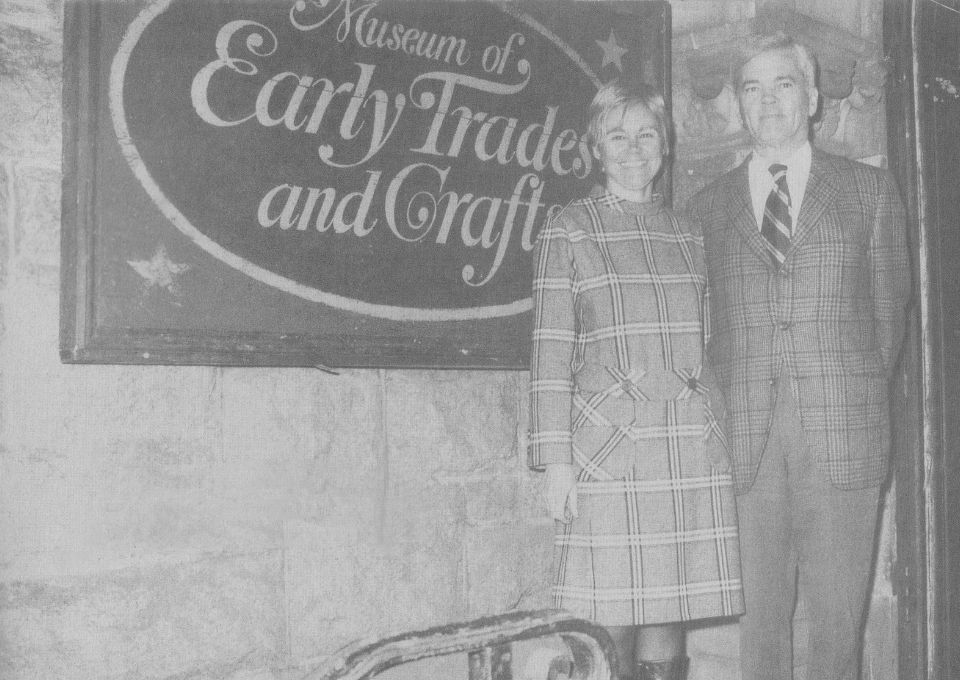 To inspire a connection to NJ history, culture, trades and crafts.

Sharing the past, imagining the future.

Community : We strive to be an inclusive and collaborative place where all feel welcome.
Innovation: We incorporate creativity and technology in all our exhibits and programs to spark a connection with history.
Integrity: We uphold the highest standards in museum practice.
Education: We create experiences and share stories of the past to help visitors discover our collective history and culture.

⯈ Our Building  ⯈ Our Community 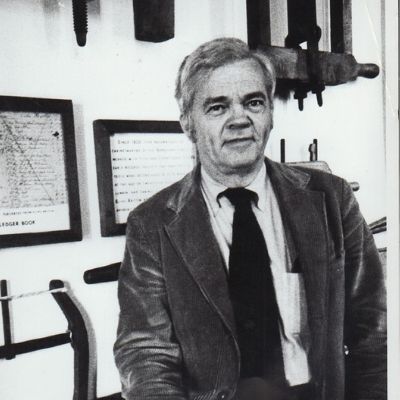 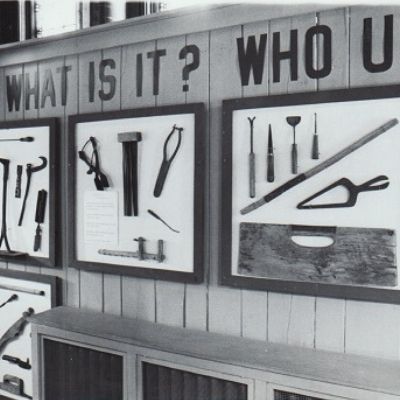 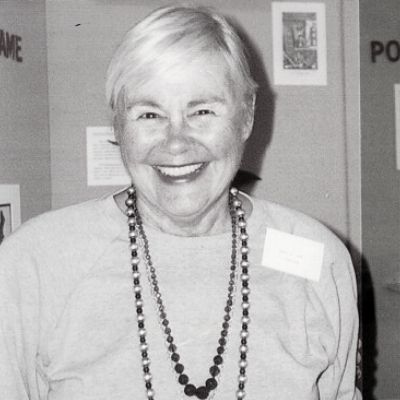 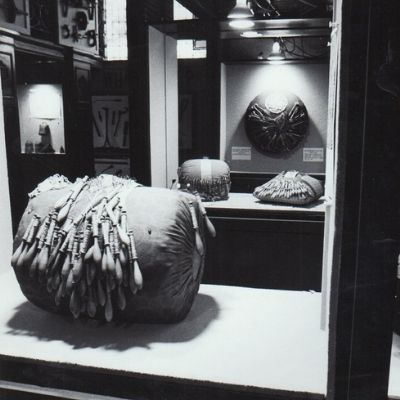 In 1970, Agnes and Edgar Law Land founded the Museum of Early Trades & Crafts  (METC) with the donation of their extensive personal collection of 18th and 19th century artifacts representing the lives of the early immigrants to New Jersey. This core collection has been supplemented over the years, and now consists of over 8,900 objects that include tools, textiles, pottery, and archival materials that tell the stories of the people who lived and worked here nearly 200 years ago.

The Lands raised a large family in Madison, NJ after moving to the area from Long Island.  They both had a keen interest for history and education, which eventually led to the founding of METC.  The Lands primarily collected hand tools and objects that were made with these tools, reflecting the working lives of the people of New Jersey. It was important to both Edgar and Agnes Land that these artifacts have tangible connections to the past, preserving a piece of living history—objects that were used by real people who had productive lives and worked and raised their own families here in NJ.

Although much has changed at METC since the mid 20th century, the collection that was started by the Lands continues to tell the stories of the immigrants and innovators who travelled here from other parts of the world to work the land, raise their families and create communities.  Today, the collection is cared for by professional collections management staff, providing opportunities for research and educational programming.

⯈ Our Beginnings  ⯈ Our Community 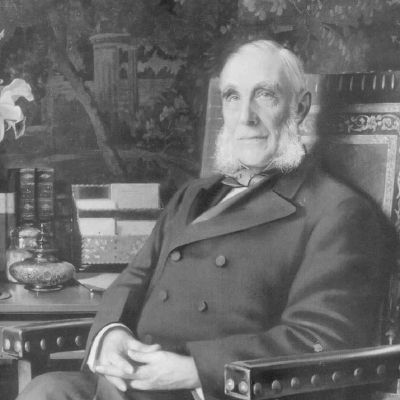 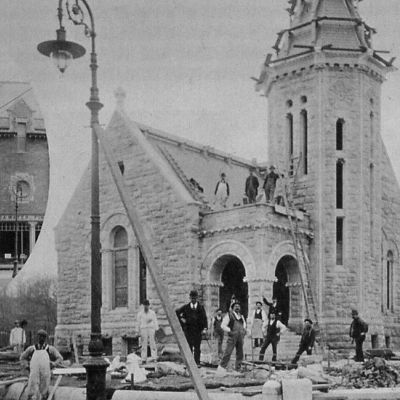 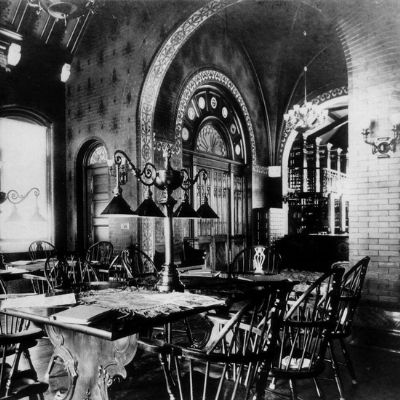 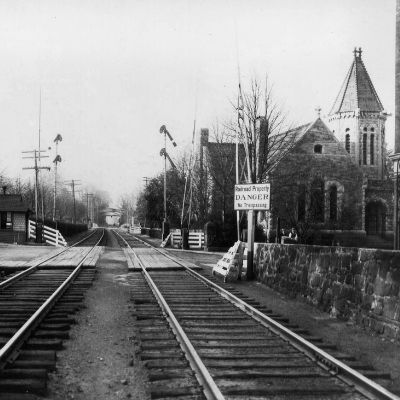 The James Library building has been the home to the Museum of Early Trades & Crafts (METC) since 1970.  Built in 1899 by philanthropist D. (Daniel) Willis James, It served as Madison’s first public library from 1900 to 1967.  Mr. James was born into a wealthy family in Liverpool, England in 1832.  His father was a successful merchant, and his mother was the daughter of Anson G. Phelps, of Phelps, Dodge, and Company. After graduating from Amherst College in Massachusetts, James married Ellen S. Curtiss, with whom he had one son, Arthur Curtiss James.

James became the head of Phelps, Dodge, and Company with interests in mining, investments, and transportation companies. Among other interests, he was a director of the Northern Pacific Railroad Company.

James and his family lived in New York City, as did many wealthy 19th-century industrialists. In 1885 he purchased a plot of land on the corner of Loantaka Way and Madison Avenue in Madison, NJ where he and his family lived until his death in 1907. The James Estate remained in the family until 1916 when his son Arthur Curtiss James sold the property to Mrs. Marcellus Hartley Dodge (Geraldine Rockefeller Dodge). The property is now part of Giralda Farms.

Mr. and Mrs. James gave several gifts to the town of Madison, including  James Park in 1887, and  built the James Library in 1899, believing that “a free library would be a means of public enjoyment and benefit.” Characteristically, he did not put his name on the building but instead had inscribed in stone the words “Library” and “Free to All.” In an unusual move, James provided for the Library by designating that the income he earned from his commercial property across the street (The James Building) be used to support the Library. The museum’s main building is owned by the Borough of Madison and the James Building across the street, another historically significant structure is home to the museum’s Education Annex.

In the mid-1990s, the Museum’s Trustees embarked upon a capital campaign to restore the building to reveal its long hidden architectural features and the many literary quotations that decorate the windows, walls and fireplaces. A new glass-roofed conservatory now provides an elevator and ground-level entrance for visitors with limited mobility.  The building is listed on both the State and National Registers of Historic Buildings, and the Museum continues to preserve and care for the building. In partnership with the Borough of Madison and the Morris County Historic Preservation Trust, there is an on-going restoration and renovation project that will ensure this magnificent building with continue to grace the downtown for generations to come.  The building is significant for many of its unique architectural features, and METC staff offer regular guided tours highlighting the artistic details of both the exterior and the interior.  Learn more about the building’s Seth Thomas Tower Clock here.

⯈ Our Beginnings  ⯈ Our Building 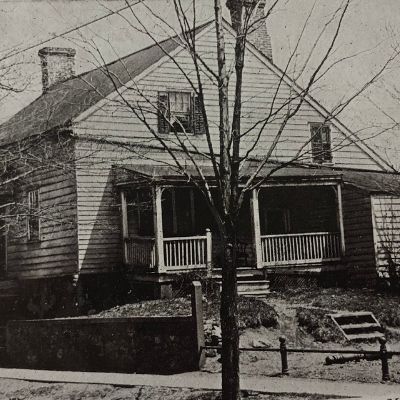 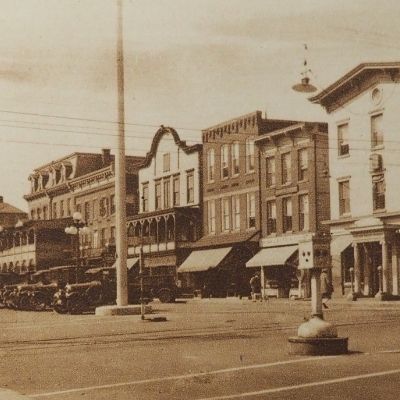 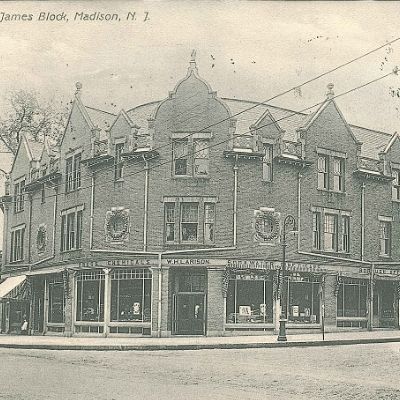 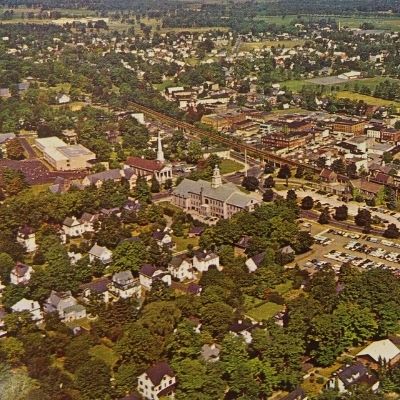 Before New Jersey was a colony, the area that is now known as Madison saw an influx of settlers around 1710 from the Elizabethtown and Newark areas.  The general area was known for many years as South Hanover and the first cluster of homes in what was then known as Bottle Hill were built along Ridgedale Avenue  close to a tavern that was located near what is today James Park. During the Revolutionary War, the Continental Army established the Loantaka encampment in 1777. Of the soldiers encamped at Loantaka most were militia. A number of the officers were garrisoned in the homes of Bottle Hill residents. Colonel Matthias Ogden probably stayed at Miller Station and General “Mad” Anthony Wayne in the Sayre house—both still standing today on Ridgedale Avenue. It is also believed that General George Washington visited and used the Miller’s Forge during that time.

The origins of the name Bottle Hill are debated, but some sources indicate that it might have been a reference to an early sign in the shape of a bottle at a tavern on the corner of Ridgedale and Park Avenues. Other sources suggest the name may have come from the bottleneck shape of an early land parcel. The first use of the name Bottle Hill has not been determined specifically, although it does appear on Major Robert Erskine’s Loantaka Valley Campsite map from 1777.

One of Madison’s earliest residents, Andrew Miller, arrived from Long Island in the early 1700s, purchased a tract of land along Ridgedale Avenue, and either he or his son, Josiah, constructed a house there circa 1730. The property became known as “Miller’s Station.” Andrew’s grandson, Luke, was born at Miller’s Station on September 8, 1759, and became a significant force in the development of Bottle Hill and its various institutions. Luke Miller served as trustee and assessor of the First Presbyterian Church and was a founding trustee of Madison Academy, working to prepare plans for that institution, which would be erected at the corner of Park and Ridgedale Avenues in the first decade of the 19th century.   The Luke Miller House has been part of a collaborative research project with METC, The Madison Historic Society, and Madison High School, and Miller’s portrait is on display at METC.

By the late 18th century, the Sayre and Miller houses were joined by several small dwellings identified stylistically as “East Jersey Cottages.” These vernacular dwellings were typically one-and-a-half stories tall and side gabled, with small knee wall windows on the upper story and wide clapboard siding. William Parkhurst Tuttle, an author of several histories of the community, described the village of Bottle Hill in 1801 as comprising approximately twenty dwellings, most of which were located on either King’s Road or Ridgedale Avenue, thus indicating the street’s early importance.

With the construction of the Morris and Essex Railroad in 1837, Madison developed stronger links to the metropolitan regions of New Jersey, as well as to New York City. Not only were commercial goods transported to expanding markets, but the village also began to attract wealthy New York merchants and visitors attracted by the beauty of the region. The railroad station was initially located near the James Library Building (the home of METC). The depot was relocated to the northwest corner of Waverly Place and Kings Road in 1855, helping to shift the community’s “center” further south.

In addition to a growing residential population, Madison had begun to attract visitors from New Jersey cities such as Newark, as well as from New York by the mid-19th century, as transportation made the village readily accessible and its rural atmosphere made it physically attractive. The Ridgedale Inn, a popular 19th and early-20th-century hotel, stood at the corner of Ridgedale and Park Avenues. While portions of the hotel were said to have dated to the late-18th century, the main structure was erected circa 1850. Historic photographs show the hotel’s considerable landscaping, which incorporated such amenities as tennis courts and croquet grounds.

Madison’s growing reputation as “The Rose City” during the last quarter of the 19th century fueled its development, as did the founding of Drew University (1866). Beginning around the time of the Civil War and continuing for almost 100 years, Madison was home to 45 different rose-growers.

In 1905, the parish of St. Vincent’s erected a new church building outside of the Bottle Hill area to replace their existing 1839 structure at 69 Ridgedale Avenue. The 69 Ridgedale Avenue building was subsequently converted to a private residence. The years between 1912 and 1921 were a time of development and growth for the community. More dwellings were erected in the Bottle Hill Historic District during this period, and they reflect the national popularity of the Bungalow style, in addition to examples of the Tudor and Colonial Revival styles. Their construction, along with a small number of structures erected in the 1920s and early 1930s, brought the neighborhood to nearly full development, where it has remained largely intact.

In 1917, the James estate was purchased by Geraldine Rockefeller Dodge, the daughter of William Rockefeller. She married in 1907, M. Hartley Dodge, heir to the Phelps-Dodge industrial empire. They expanded the property by buying the adjoining estates and named the property “Giralda Farms”. Mrs. Dodge founded an animal shelter, St. Hubert’s Giralda, to serve the animals she loved and was endowed in her will and so continues as a shelter. In 1937 she dedicated the Hartley Dodge Memorial Building to the Borough.

As Madison developed, it became a prominent suburb of New Jersey’s larger cities, such as Newark and Morristown, as well as a suburb of New York City. Throughout this growth and development, the community’s original core — the Bottle Hill Historic District — remained largely intact, reflecting the expansion of the community from its beginnings in the mid-18th century into the 20th century and representing the earliest (as well as the most continual) wave of suburban settlement within the borough.

Today, the Borough of Madison is home to about 16,000 people.  In 2014, Madison celebrated 125 years of incorporation.  With a stunning downtown and tree-lined streets, Madison has been the backdrop for a number of television shows and films. This relatively small town boasts direct train access to midtown New York City, is home to Drew University, Shakespeare Theatre of NJ, and one of New Jersey’s hottest jazz clubs.  The town supports a vibrant arts and cultural community, excellent restaurants, top notch schools, history, diversity and is a welcoming, vibrant community.