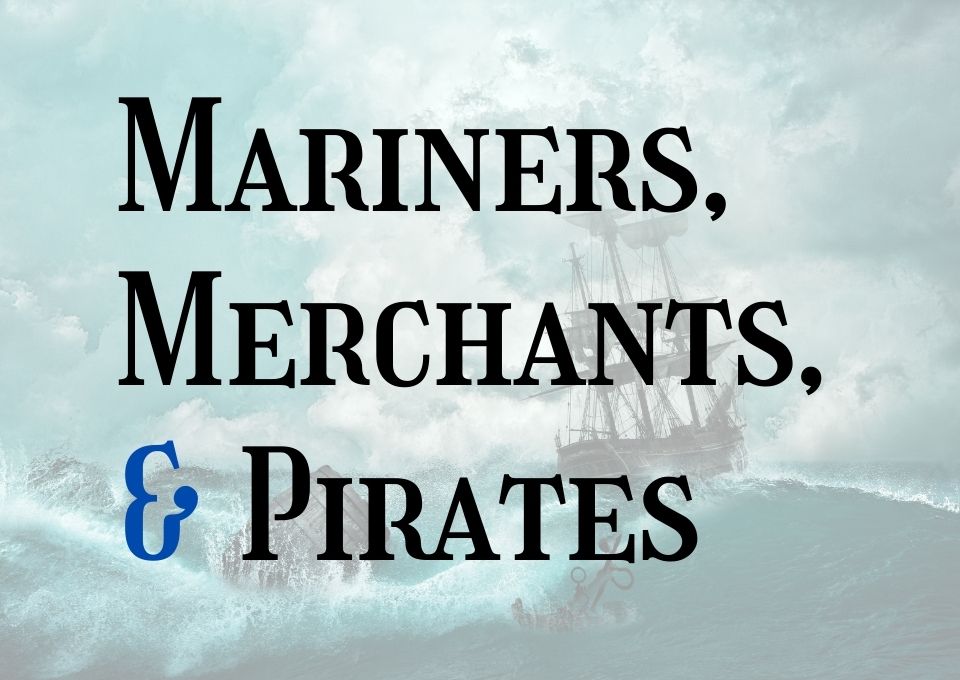 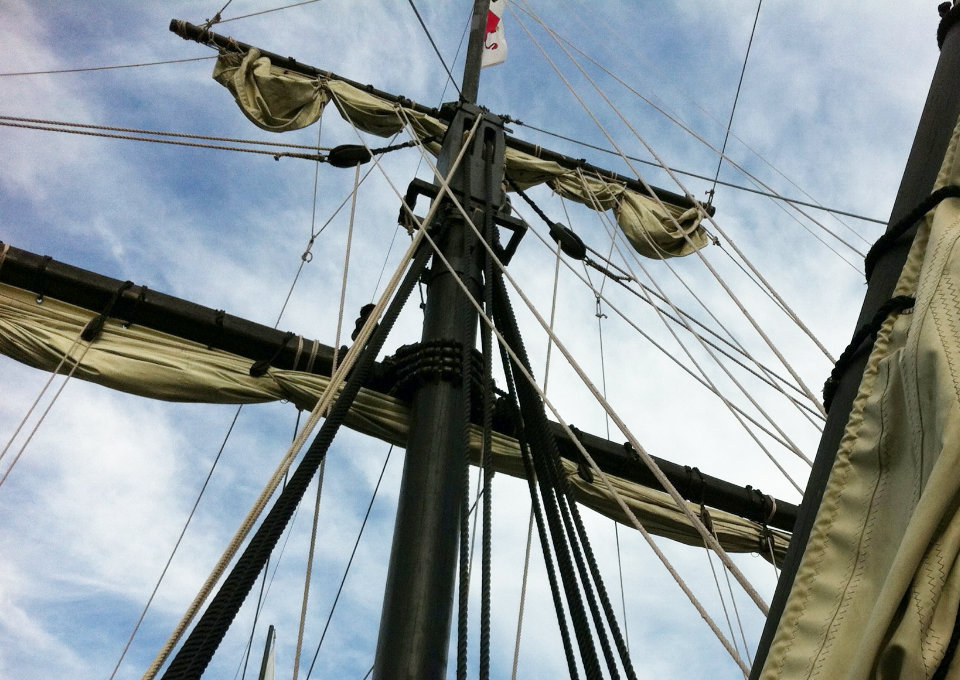 Mariners, Merchants & Pirates was on display from February to September 2011 and explored early American seafaring techniques, tools, and methods.  Visitors learned about the nautical navigation system of the time and took a close look at the wide variety of artifacts that were used in this direction-finding process.  In addition, Museum patrons had the opportunity to discover more about pirates and privateers in New Jersey, the early effort to establish a major port in Perth Amboy, the types of goods and resources that shipped from New Jersey’s shores, and the basic tools of salty tar (what sailors were called because of their water-proof clothes).

Perth Amboy and the Small Ports of New Jersey

New Jersey was largely an agrarian state sandwiched between municipalities in New York and New Philadelphia. Geographically, New Jersey had natural harbors well-suited for ports but did not have the political organization, industrialization or population that other American coastal colonies did. New Jersey’s early government did not focus on building strong ports, in part because the government itself was not focused. Despite this, as early as 1676 there was an effort to make Perth Amboy a major commercial port. Geographically, it had much to recommend it. Located at the mouth of the Raritan River and sheltered from strong storms by Staten Island, it had water deep enough to easily accommodate the 300-ton vessel. Despite this, Perth Amboy could not compete with the larger ports of New York and Philadelphia. At its peak in 1726, Perth Amboy had 68 vessels registered to have come to port in contrast to New York’s recorded 521 merchant vessels in 1741.

Of the ports scattered along the New Jersey coastline, there were typical imports and exports moving through the port. In terms of imports, New Jeresyans were farmers and woodsmen and needed tools of those trades. Axes, hatchets, handsaws, pails, sieves and the like were in demand, as were finished goods such as bridles and saddles. All sorts of iron and metal goods, both for the kitchen and the workshop, were imported. Sugar and wine were also regularly imported by the 1750s, but in far less quantity than their cheaper alternatives, molasses and rum. The bulk of New Jersey’s exports came from its farms and forests. Its biggest exports were natural and refined grain: mostly wheat, but also oats, rye and Indian corn. About one vessel in five shipped lumber or finished products such as staves and shingles. Other typical New Jersey exports were onions, garden seeds, candles, beeswax, bayberry, wax, tallow, lard, apples, and pork or beef products. Some of the grain and most of the apples were not shipped in their natural state but converted into the far more stable and marketable forms of cider and beer.

The Shipbuilders and Sailors of New Jersey

The ports of New Jersey offered a variety of occupations for the New Jersey citizen. The most prominent of the positions was the New Jersey shipbuilder and sailor. Just as the lack of ports made it difficult for New Jersey to become a major trading powerhouse, it also limited the scope of the New Jersey shipbuilding industry. From 1702 to 1708, 7 commercial ships were built in New Jersey which is not much compared to the 143 vessels built in Boston during the same period. This difference is likely due to the fact that many of New Jersey’s vessels were made by jacks-of-all-trades farmers rather than specialized tradesman. Many farmers in New Jersey built sloops and other small vessels in their own backyards in the off seasons and then slid them over snow and ice to the water. These farmer-built vessels may or may not have been as sturdy as the commercially built ones, but they were usually cheaper to buy, which allowed for the New Jersey shipbuilding industry to continue despite its competition.

New Jersey sailors followed the vein of their shipwright neighbors. While there were certainly professional sailors in New Jersey, there was not as much of a community of merchant sailors as there was in New York or Philadelphia. In the 1700s, most Jersey sailors were fishermen, farmers, or their sons looking for a change of pace, adventure, and economic opportunities. Many returned after a time to their original trades. The typical New Jersey merchant vessel traveled up and down the eastern coast, buying and selling cargo on speculation and never really traveled into the open ocean.

Navigating in the Colonies

Making your way across the ocean in the days before GPS was done using various instruments and tools by talented navigators. This exhibit featured some of the more common tools used by these individuals

There are no landmarks at sea, especially when one is out so far that he cannot see land at all. During the day, sailors could use the sun, which rises in the east and sets in the west, to give them some idea of what direction they were facing. On clear nights, the North Star could be used. But what to do on cloudy or stormy nights when heading in the wrong direction could send one miles off course, or worse yet, shipwrecked? Starting in the 13th century, the answer was the Mariner’s compass. This is a magnetized needle pointed northward and thus could be used to orient the sailors. It was not, however, a perfect tool, because it pointed to the magnetic north pole, not true north, and the pull of the pole is not equal in all places. Once these variations were recorded on a chart or map, the compass proved to be an invaluable tool. A compass could not tell a captain where in the world he was, but could at least tell him what direction he was facing.

A sextant help sailors figure out where in the world their ship is. It did this by enabling them to calculate their latitude – the position of the ship in relation to the equator and the North or the South Pole – by looking at the position of the sun. This was usually done at noon when the sun was at the highest point in the sky and cast its shortest shadow (a fact that could be determined without a clock). Quadrants, octants, and sextants all do the same thing; the difference is that quadrants and octants can measure angles of elevation up to 90 degrees whereas sextants can measure up to 120 degrees.

Telescopes came in various lengths and were very useful in spotting landmarks and other ships. They had long been in use by the time America was settled. As the quality of lenses improved, shorter telescopes, which were much easier to use at sea, were made.

Chronometers are very accurate clocks, with mechanisms to keep them unaffected by changes in temperature, humidity, or rocking back and forth at sea. Knowing the correct time was necessary to calculate longitude. It was not until 1764 that a seagoing chronometer accurate to one-tenth of a second per day was designed and made by John Harrison. The performance of his clock was proven by Captain James Cook during his circumnavigation of the world in 1779. While extremely useful, they were very expensive and not all sailing ships could afford one. Also, Chronometers needed to be wound regularly. If one ever ran down, it could not be accurately reset until another working one was found. Two-day chronometers needed to be wound at least every other day, while eight-day chronometers gave a benefit of a little more time before requiring winding. Nevertheless, both two-day and eight-day chronometers maintained the most accurate time if they were wound daily.

Colonial New Jersey did not have a major commercial port like its neighbors, but its many natural coves, small population, and location between the big ports of New York and Philadelphia made it a preferred stopping ground for smugglers, tax evaders, and pirates in the late 1600s and 1700s. Ships would anchor close to shore and the cargo would be rowed in on small boats. There it could be sold to middlemen who would transport the goods overland to Philadelphia and other markets. The landing parties would spend their money in taverns, get provisions, and -just possibly – hide some of their loot. The fortunes of many colonial families were made by reselling plundered goods at a large profit or catering to the needs of the thirsty and wasteful sailors.

The names of many of the small-time pirates have been lost to history, but several of the most infamous are believed to have spent some time in New Jersey. Both Captian Morgan (c. 1635-1688) and Edward Teach (c.1680 – 1718)- better known as Blackbeard – may have vacationed in New Jersey. Capitan Kidd (c. 1645 – 1701) is known to have spent at least a short time off the coast of New Jersey. In fact, some legends say that he hid his treasure along the New Jersey coast.

The difference between pirates and privateers was a legal one. Both pirates and privateers sailed on privately owned vessels, armed and outfitted for the purpose of preying on enemy commercial ships for the profit of her owners and crew. Privateers, however, were authorized to do so by commission or letter of marque by a government. It was this letter that made the difference between privateering and piracy. The government usually claimed a portion of the prize, but most went to the ship’s backers with a good proportion also going to the officers and crew. Common sailors could easily take home considerably well above what they would have been paid on a regular merchant vessel.

During the American Revolution, before the country had much of a Navy, British ships were harassed by American privateers. While these forays did not cripple British shipping, they did divert supplies to Americans and add money to the economy.

Privateering vessels usually had much larger crews than cargo ships. They included “gentlemen sailors,” men who were typically well-educated, sometimes from established families, often with some military training, who formed a marine guard. They were on board for the profit and the fight, not for the running of the vessel. The possibility of getting rich was very real. Even as early as 1812, it was not unheard of for privateers to bring in cargo valued at over a million dollars.

New Jersey did not have as many privateers as some of the more populous colonies, but they were among the most successful. The first privateering vessel from New Jersey during the Revolutionary War was the schooner Enterprise, captained by J. Campbell. On July 22, 1776, Enterprise successfully captured the Earl of Errol, a ship that was armed with six cannons and had a cargo valued at one hundred thousand dollars. Another very successful privateering vessel sailing out of New Jersey was the Skunk. During the Revolutionary War, she was reported to have captured 19 vessels, many with cargo of considerable value.

Ships of the American Colonies

Ships of the Colonies

Schooners One of the most popular ships in colonial America was the schooner. Developed in Massachusetts in 1713 by a shipbuilder named Andrew Robinson, a schooner is a sailing ship with fore-and-aft sails on its two or more masts. The placement of the sails and the sail type made the ship ideal for sailing up and down the coast of North America. While schooners could hold less cargo that the Barkentines or Brigs, they were far faster and more maneuverable than these larger vessels. Schooners were used by Colonial Americans to ship goods along the coast and to the Caribbean. They were also ideal for smugglers as they could slip past patrolling British ships into New Jersey’s many natural harbors and inlets with smuggled goods.
MORE PAST EXHIBITS